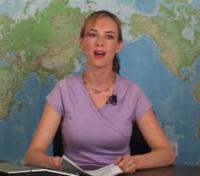 Rocketboom is an inspiring example of vodcasting (or video-on-demand casting… or video blogging). As they describe themselves, the show is “a three minute daily videoblog based in New York City” which covers and creates “a wide range of information and commentary from top news stories to quirky internet culture”… with an emphasis on the quirky.

They do a great job of using the video medium to communicate things visually and in ways they could not in a text or audio blog. I look to this vodcast as a model going into the process of producing the OCDE podcasts, which will actually be created using video and offered using iTunes bookmarks in the style of the cutting edge Apple Distinguished Educators podcasts. Robert Craven of the OCDE Ed Tech department has also been involved in the ADE podcasts and is helping to spearhead the efforts at the OCDE too.

Having caught up on several back issues of Rocketboom during flights lately (where podcasting is perfect for driving commutes, vodcasting is great for flying commutes… try it out, ML, if you haven’t already), I’ve had a chance to reflect on the show… in the light of preparing to do one at the OCDE.

This has been a valuable process for me, and perhaps these reflections will be a helpful starting point for others who are interested in producing something similar.