We have had our share of memorable moments since receiving our Nexus 7 tablets.  Things like charging multiple tablets and having non-homeroom students also using the tablets was now on my list of daily things to manage. It was going to be so easy…

I did not think too much about it, at first, because I thought it would be one of those easy tasks that did not take a lot of effort.  When the tablets needed to be charged, I would just plug them in.  It all seemed so simple.  I suddenly found myself wondering how was I going to do this, and where on earth do I put them in my already crowded classroom?  The minor problem came when I realized that I did not have enough power strips on hand.  I called my teammate, Beth, and asked if she had some that I could use.  Thank goodness for the IT department for having a secret stash of odds and ends for technological emergencies!  With her spares, I had enough to set up charging stations all over my classroom on any horizontal or vertical surface that was available.

Before I could actually start plugging them in and charging them, my next task was to remove each charger from its box and take off the plastic bags and ties.  After I got the USB cables plugged into the charging units, the tablets were finally ready to be charged.  As I started this task, my college-aged son, Stephen, stopped by my classroom to lend me a hand.  He helped me find a few more open outlets for the power strips, and we got them all plugged in and charging in less than 10 minutes.  They were scattered all over my classroom, but each tablet had a home to charge.  My “Oh, no!” moment was no more! 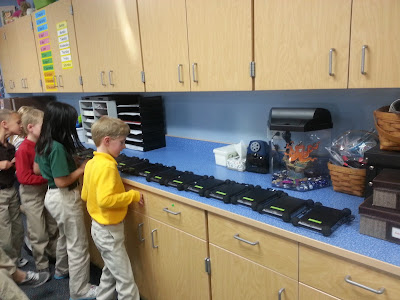 I had mentioned in an earlier post that it was important that I have identification names and numbers on all of the tablets. This was done to prevent major “Oh, no!” moments.  Since my school does ability grouping for math and reading, my class decided that we should share our tablets with the other second graders who have me as their math and reading teacher. Doing this has allowed me to put the Nexus 7’s into the hands of close to 75 second grade students! This kind gesture made the other second grade classes very happy.  By assigning each guest student a specific tablet, I have made all of them accountable for using them.  This, along with adding LanSchool to each tablet, has made the students very aware of computer security.  It also prevents 25 students from asking me all at the same time as to which one they should use!

A funny moment happened one day when I heard an “Oh, no!” from one of my homeroom students when she was looking at her photos in her photo gallery.  She brought her tablet over to me to see.  One of the guest students assigned to her tablet had been exploring the camera feature while usng her tablet and snapped a self portrait. My homeroom student remarked, “Well, it is okay, Mrs. Stewart.  She took a really good picutre, and now you don’t need to show her how to use the camera. She will be an expert pretty soon.”  All I could do was smile!  This is the kind of moment that makes this teacher pretty darn happy.

My next post will be showcasing some of the work the students have done out in the field using their tablets and the camera  to show their creative “wow” moments.  You will be amazed at what they did with just a few minutes of instruction on using the camera feature and being set free on their photo safari in and around our school.