NOTE: Walden databases categorize this as coming from a “scholarly (peer reviewed) journal”, but it seems somewhat commercial in nature and does not describe a formal study. However, I found it valuable for its relevance to my research. DeKanter explicitly discusses the use of video games as constructivist learning environments… and in formal k-12 education to boot. Also, it turns out I’ve met the author… twice… at the education arcade conference in May, and at the Games, Learning, and Society conference in June. In fact, he handed me a demo of the software that is discussed in this article.

Nick DeKanter (2005), vice president of Muzzy Lane Software, was interested in interactivity that focuses on “the skills of people, not he capabilities of technology” (p. 26) and he believed that “the next big evolution in interactivity [is] networked game simulations” (p. 26), which can provide a constructivist learning environment (p. 27).

Such games can provide a context for learning by making learning tasks authentic and anchoring them to a larger task or problem which reflects “the complexity of the environment [the students] should be able to function in at the end of learning” (p. 27). Networked game simulations can also provide students with opportunities for inquiry by giving the learner “ownership of the process used to develop a solution” (p. 27). DeKanter also suggested that the game environment is collaborative because “one of the most important intersections between next-generation strategy games and the constructivist learning framework is the idea that… ‘knowledge is socially negotiated'” (p. 27). The games can also provide a good deal of support for constructivist teaching and learning, as they help teachers also develop “ownership of the overall problem or task” (p. 27) and they provide students “opportunity for reflection on both the content learned and the learning process” (p. 27). 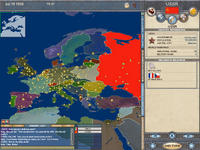 Most exciting is DeKanters desire to create something new… something that is “far different from the single-user games of the past, or even the internet-based games [of today]” (p. 28)… something that would be a “radical departure from conventional wisdom” (p. 28) by marrying the ideas of strategy games and software for education. He called for next generation interactive games simulations to be customizable, transparent (to the instructor), and rich in feedback (for the teacher and student). One example of such a game is Muzzy Lane Software’s Making History, which “gives the student complete control of – and responsibility for – a nations economic, diplomatic, political and military conditions” during a World War II simulation.