Anytime a class set of items enters a classroom, there needs to be an organized method to monitor them.  I realized that our new tablets could be managed just as easily as anything else in my classroom.  I would just use the classroom student identification numbers I assigned the students on the first day of school.  This would ensure that each student would always get their own tablet.  (I will let you know why this is so important to me in a later post.)  I made labels with their last names and ID numbers.  I took a photo of each box with their last name and number.  I then attached the labels to the back of the Nexus 7 tablets.  After attaching the label to the tablet, I took a simple colored dot with the ID number written on it and attached that to the box.  (This was cheaper than using label tape!)  This allowed me to store the boxes and remember which tablet belonged with which box and have a file stored with this information.  Beth and I also opted to leave the clear plastic film on the tablets to help protect the screens for as long as possible.  We figured that this was better than nothing for the time being.  We shall see how long this packaging film lasts as our cheap screen protector! 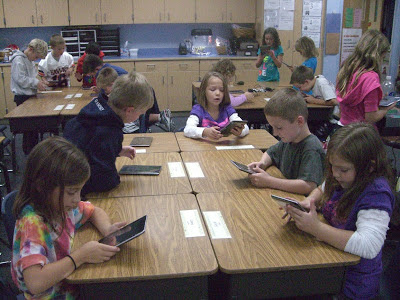 After getting the tablets marked with ID numbers and handed out to their new owners, we were finally ready to get started!  I gave the students a brief overview of the Nexus 7,  how to turn it on, and basic care and handling.  Since the students had already set-up their Google accounts the week before the tablets arrived, it was so simple to have them enter their information after turning them on. Oh, there were a few who had to try it a couple of  times, but it really was easier than I thought it was going to be.  The only minor glitch was when it came to the step where the wireless security code needed to be entered into the tablets to allow for an internet connection.  I realized that I had to put that information into each tablet myself!  It happened to be our lunch and recess time, so I was able to get it all done by the time the students got back to class.   Needless to say, they were pretty happy that I had every tablet ready to go.  Their excitement was pretty high at this point.

After all of the start-up steps were completed, they were ready to take their tablets for a test drive.  The first thing they wanted to do was visit was Google Earth!  It was a simple and easy first task. Their first couple of stops on their virtual trip was their house and our school.  Then one of the students suggested that we visit different countries.  It was not long before most of them were gathered around the world map in our classroom and found the places they wanted to see.  By the end of the class period, I believe that every continent had been visited by my classroom travelers.  This proved to be a very exciting virtual field trip.  I think the most exciting moment that I captured in a photo was when two students found out that they could visit Paris!  It was a great teacher and student moment! 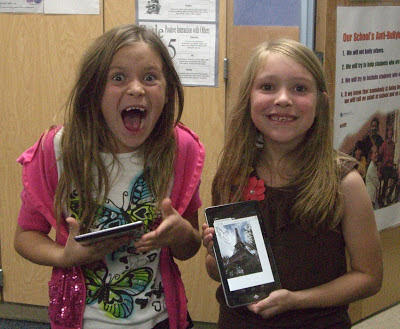 We definitely had a great first lesson with our new tablets.  Our test drive was a huge success!