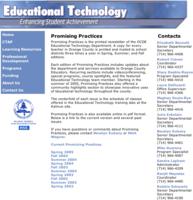 One of the (side) projects I have committed myself to at the Orange County Department of Education has been making sure that the Ed Tech Department (at least) has a reasonably up to date and accurate web page. Until this weekend, I had nothing to show for it, but thanks to Scott Harris, Robert Craven, and many others, the site has gone live despite my extended absence!

I approached this project with the philosophy that simplicity was the key. I didn’t want a major graphic redesign… just a clean and consistent interface… so it is based on the graphic header and colors already used on the old site.

The lion’s share of the credit (did I really just say lion’s share?) goes to Scott Harris, our paid intern, who is also a student of computer science and film studies at UCI (and something of a professional gamer, too). I brought the idea to him and asked him to work on it when he had time between other work requests from our department. He let me know that he didn’t know a shred of HTML, but apparently I was right to have faith in his ability to pick it up. A day later he came back and told me, “I think I have something you’re gonna like.” And he did.

After some tweaking, I asked if it were possible to do a news page and a form to updated it. Again, Scott let me know he’d never written a line of php, but sure enough, a day later he had something I was gonna like.

This too went through some revisions and then I really thought I’d go for it and asked if we could offer the news updates as an RSS feed. Naturally, he knew nothing about it, but a day later he reported that Really Simple Syndication really is simple. I hope you’ll all subscribe to the feed (at least those of you in Orange County, though I think much of the news will be relevant and interesting to others)… see the little blue icon on the left of the page below the OCDE logo.

By now, I’m sure he’s sorted out enclosures, too, for our upcoming podcasts, which are designed to be relevant and interesting to a nationwide (or global?) audience.

No news has been added yet, and might not be until I return to work on the 8th, though I have invited the others in the department to post. I expect we will have daily updates concerning upcoming classes and other opportunities as well as related educational technology news. And, we have a weekly podcast program planned. :D

It was thanks to Robert Craven (and those in the Ed Tech and IT departments he coordinated with) that this project was seen through in my absence.

Note: The old address of www.ocde.us/technology/ will redirect you here. Pretty much any other bookmark on the old site will probably now be broken. If you are missing something and can’t find it’s replacement in the menu, let me know.

Thanks for reading… and I hope you’ll enjoy the OCDE Ed Tech Feed.