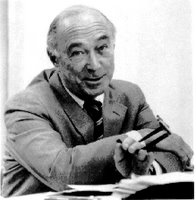 I just spent much of the evening blasting through Bruner’s Toward a Theory of Instruction… before catching this week’s episode of arguably the best show on television. :)

As I got a little ahead today (I even started Actual Minds, Possible Worlds), I now have the luxury of sharing some of my thoughts on Bruner. He was much more of a psychologist, anthropologist, and linguist than I thought. Nevertheless, or perhaps on account of these things (as he might argue), much of what he wrote in the 1960’s seems prescient today.

It may well be the case that not only are we entering a period of technological maturity in which education will require constant redefinition, but that the period ahead may involve such a rapid rate of change in specific technology that narrow skills will become obsolete within a reasonably short time after their acquisition. (p. 32)

Surprisingly, he also describes the reaction this country has had to such change (think of the emphasis on math and science in his time – and the focus on standards in ours)… but he suggests something else entirely, something a lot more in keeping with my vision of Educational Technology and Life. :)

The first response of educational systems under such acceleration is to produce technicians and engineers and scientists as needed, but it is doubtful whether such a priority produces what is required to manage the enterprise. For no specific science or technology provides a metalanguage in terms of which to think about a society, its technology, its science, and the constant changes that these undergo with innovation… If this change is to be managed, it requires men with skills in sensing continuity and opportunity for continuity. (p. 33)

It might not surprise you to learn I am not at all moved by alarmist reactions to the outsourcing or off-shoring of our technical jobs. Never-mind that I think its a very ethnocentric response to globalization, but this country will be just fine without its technical and scientific jobs… if we can focus on the “metaskills for dealing with continuity in change” (p. 35). (Bruner suggests the study of social or behavioral sciences as opposed to history, p. 36, and I think these things – along with more creative pursuits – may serve us well).

I further suspect that games and simulations might be an ideal medium for teaching such skills. (In fact, I propose that they already are, but I don’t have the time to support that argument here, it will have to wait for a more formal paper, or a later time.) With respect to pedagogy, Bruner advocates the use of “games that incorporate the formal properties of the phenomena for which the game is an analogue” (p. 92-93), saying that a game can be “an artificial but often powerful representation of reality” (p. 93). Consider how much more powerful these representations can be given the technology of modern video games and computer simulations. Bruner also suggests (as does Jim Gee – and others – forty years later) that

games go a long way toward getting children involved in understanding loanguage, social organization, and the rest; they also introduce, as we have already noted, the idea of a theory of these phenomena… they provide a superb means of getting children to participate actively in the process of learning – as players rather than spectators. (p. 95)

Later he also suggests that “play must be understood as practice in coping with the environment” (p. 118).

I suppose games and the read/write web are the two primary themes of this blog, and I saw an interesting relationship between Bruner’s writing and the use of the read/write web in education today as well. When it comes to motives for learning, Bruner talked about reciprocity, or “a deep human need to respond to others and to operate jointly with them toward an objective” (p. 125). There is little doubt in my mind that technologies such as blogs, wikis, and RSS facilitate this in a way that was never possible before, both over greater distances and – in some ways – with greater intimacy. Bruner identified “the will to learn” (p. 127) as an intrinsic motive, too, and as we work to inculcate our students with this will, I can also identify it as that which keeps me blogging when I should be in bed. ;) “Promoting reflectiveness” (p. 152) was a goal of Bruner’s (concept of a) successful school, and is also the goal of blogging in education, as is “the basic skill, supporting all others… reading critically” (p. 169).

Finally, I want to finish this post with what I imagine is an oft quoted passage from Toward a Theory of Instruction: “Knowing is a process, not a product” (p. 72). That seems to encapsulate much of what my colleagues and I are trying to get across to educators in Orange County and everywhere.

The Dewey fans seemed to come out of the woodwork a few weeks ago. I wonder if there is anyone following Bruner on technorati that might drop in for a comment. Any Bruner fans among the regular readers? I’d love to hear your thoughts.

As always, thanks for reading.